John Brown gains his nickname, Potowatamie Brown, when he leads his followers in the massacre of five pro-slavers at Potowatamie Creek, Kansas, in retaliation for the killing of an abolitionist in Lawrence, Kansas.

The Pottawatomie massacre occurred during the night of May 24 and the morning of May 25, 1856. In reaction to the sacking of Lawrence, Kansas by pro-slavery forces,  John Brown and a small band of abolitionist settlers—some of them members of the Pottawatomie Rifles—killed five settlers north of Pottawatomie Creek in Franklin County, Kansas. This was one of the many bloody episodes in Kansas preceding the American Civil War, which came to be known collectively as Bleeding Kansas. Bleeding Kansas was largely brought about by the Missouri Compromise and Kansas–Nebraska Act.

A Free State company under the command of John Brown, Jr., set out, and the Osawatomie company joined them. On the morning of May 22, 1856, they heard of the sack of Lawrence and the arrest of Deitzler, Brown, and Jenkins. However, they continued their march toward Lawrence, not knowing whether their assistance might still be needed, and encamped that night near the Ottawa Creek. They remained in the vicinity until the afternoon of May 23, at which time they decided to return home.

On May 23, John  Brown Sr. selected a small party consisting of John Brown Sr., his sons Frederick, Owen, Salmon, and Oliver, and Thomas Weiner and James Townsley, to go with him on a private ex-pedition.  Late in the next evening, they called at the house of James P. Doyle and ordered him and his two adult sons, William and Drury (all former slave catchers) to go with them as prisoners. The three men were escorted by their captors into the night, at which time Owen Brown and one of his brothers killed them with broadswords. John Brown, Sr. fired a shot into the head of the fallen James Doyle to make certain he was dead.  Brown and his band then went to the house of Allen Wilkinson and ordered him out, where he was slashed and stabbed to death by Henry Thompson and Theodore Winer, possibly with help from Brown’s sons.  Following this murder they crossed the Pottawatomie, and after midnight, they forced their way into the cabin of James Harris. Harris had three house guests: John S. Wightman, Jerome Glanville, and William Sherman, the brother of Henry Sherman (“Dutch Henry”), a militant pro-slavery activist.  After questioning all four men, William Sherman was led to the edge of the creek and hacked to death with the swords by Winer and Thompson.

In the two years before Brown’s raid, there had been 8 killings in Kansas Territory attributable to slavery politics, and none of those were in the vicinity of the massacre.  Brown murdered five in a single night, and this was the flash point to the powder keg that exploded into violence.  Over the next three months, 29 people died in a series of retaliatory raids and battles.

John Brown wasn’t done and he wouldn’t be done until October 18, 1859, when he would lead an un-successful slave revolt at a little town called Harper’s Ferry in Virginia.  This future raid would make his name a household word and he would forever be viewed as either a hero or a terrorist, depending upon where you stood on the issue of the day, which was, of course, slavery.

Today in 1800, the man credited with providing the spark that lit the powder keg known as the Civil War was born in Torrington, Connecticut.  The fourth of the eight children, John was born to Owen and Ruth, and he could trace his ancestry all the way back to 17th-century English Puritans.  The family moved west to Hudson, Ohio, in 1805, where Owen opened a tannery.  Owen soon hired an apprentice, Jesse R. Grant, father of future general and U.S. President Ulysses S. Grant.

Owen became a supporter of the Oberlin Institute (the original name of Oberlin College) in its early stage, although he was ultimately critical of the school’s “Perfectionist” leanings, especially renowned in the preaching and teaching of Charles Finney and Asa Mahan.  John withdrew his membership from the Congregational church in the 1840s and he never officially joined another church, but both he and his father Owen were fairly conventional evangelicals for the period with its focus on the pursuit of personal righteousness.  John’s personal religion is fairly well documented in the papers of the Rev Clarence Gee, a family expert, now held in the Hudson [Ohio] Library and Historical Society.

John led a relatively quiet life until he heard about the murder of Elijah P. Lovejoy, in 1837.  In response to the murder, John publicly vowed: “Here, before God, in the presence of these witnesses, from this time, I consecrate my life to the destruction of slavery!   From 1846 to 1850, when he left Springfield, John was a regular parishioner at the Free Church, where he attended frequent abolitionist lectures by the noted 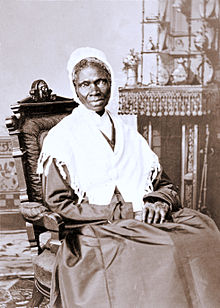 and celebrated  abolitionists Sojourner Truth and the dynamic Frederick Douglass.  In 1847, after speaking at the “Free Church”, Frederick Douglass spent a night speaking with John, after which he wrote, “From this night spent with John in Springfield, Mass. 1847 while I continued to write and speak against slavery, I became all the same less hopeful for its peaceful abolition. My utterances became more and more tinged by the color of this man’s strong impressions.”

the opportunity to meet two future Southern heroes, Col. Robert Edward Lee and Lt. James Ewell Brown Stuart, known to his friends as Jeb, when they came to arrest him for his failed insurrection.

John was hung for this, and his death sparked the War Between the States, and an anthem to victory for one side.  Blow out the candles for John “Potowatamie” Brown.